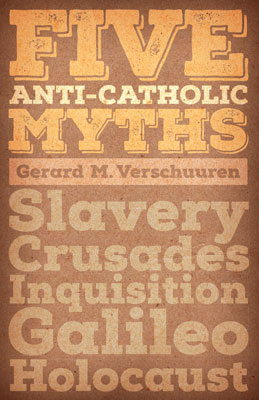 One curious feature of our times is the co-existence of a nearly unimaginable rapidity of communications with an at-times slow, even glacial, movement of ideas. Narratives that have lost any genuine explanatory power, along with the biased historical scholarship of earlier centuries, have become entrenched in the minds of millions, seemingly immune from being dislodged. Such simplistic queries as “What about Galileo?” “What about the Crusades?” are still meant to draw Catholics up short, a conversation-stopper. Scholarship of recent decades, however, has thrown new light on these matters, and is finally allowing the truths of history to become more widely known.

Here is the distillation of the best of that recent historical work for students and adults alike—an unadorned laying bare of the truth. The five myths analyzed in this book have each been shaped by post-Reformation propaganda and Enlightenment prejudices and their residual effects. With Gerard Verschuuren’s new book, Catholics now have sure and ready replies to these baneful narratives.

“Gerard Verschuuren has written an extremely valuable and thoughtful response to issues Catholics encounter from an often doubtful and cynical world. Each of these five myths is well researched and thoroughly covered, avoiding excessive defensiveness, yet insisting on fairness and accuracy from our critics. This book is a gift to Catholics, historians, and also to critics who seek thorough and thoughtful analysis.”

“Is anti-Catholicism the last acceptable prejudice in America? In Five Anti-Catholic Myths, Gerard Verschuuren provides a clear, forceful, and eminently factual refutation of some of the foundational slurs aimed at the Church. Here is apologetics that is timely, intelligent, and done with a flare.”

—RUSSELL SHAW, consultor of the Pontifical Council for Social Communications, adjunct professor at the Pontifical University of the Holy Cross, Rome.

“Mary Ann Glendon, professor of law at Harvard, has stated that ‘it must be hard for Catholics brought up on movies and TV to avoid the impression that their Church holds a special niche in some historical hall of shame.’ We can be grateful to Gerard Verschuuren for correcting that unfortunate misconception. He has provided anyone interested in being liberated from anti-Catholic mythology a valuable service. Five Anti-Catholic Myths is readable, reliable, and rewarding.”

Pernicious lies exposed for what they are (The Irish Catholic, 7/23/15)

GERARD M. VERSCHUUREN is a human geneticist who also earned a doctorate in the philosophy of science. Now semi-retired, he spends most of his time as a writer, speaker, and consultant on the interface of science and religion, creation and evolution, faith and reason. His most recent books include What Makes You Tick?: A New Paradigm for Neuroscience (Solas Press, 2012), The Destiny of the Universe: In Pursuit of the Great Unknown (Paragon House, 2014), and Life’s Journey: A Guide from Conception to Natural Death (Angelico Press, forthcoming, 2015).