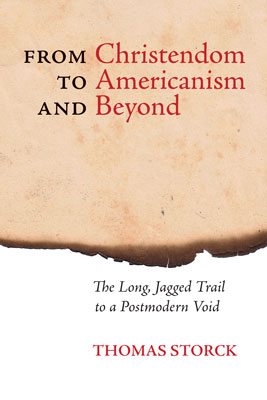 From Christendom to Americanism and Beyond
The Long, Jagged Trail to a Postmodern Void

From Christendom to Americanism and Beyond describes the momentous changes that occurred in the European cultural orbit from the end of the Middle Ages until the mid 20th century. During this period the Catholic unity of the West — what rightly was called Christendom — was lost, and the social order came to be organized on an entirely new basis. Instead of a society that attempted to arrange all its activity and institutions in a hierarchy directed toward God, now politics could become merely a series of power grabs, economic activity an aimless and unabashed striving for riches, and the work of artists simply a means of self-expression. Not only were the institutions and customs that had previously sought to guide human activity to the glory of God and the common good destroyed, but this destruction was justified — even celebrated — in the new theories and philosophies that arose during this time. Readers who want to understand the broad trends and movements that underlie historical events will find this book an excellent guide to the rise of modernity.

Praise for From Christendom to Americanism and Beyond:

“Thomas Storck has quite possibly contributed more than any other living writer to the articulation, defense, and contemporary application of Catholic Social Teaching. But his incisive work on broader philosophical, cultural, and historical subjects is not known nearly as well as it should be, a misfortune this book will help remedy. Christendom, Modernity, and Americanism — among the most elusive quarry in the world of ideas — are fatally attractive, yet rarely captured in a convincing analysis. In these essays Storck shows that he has the wide-ranging thoughtfulness, command of detail, and synthetic vision to pull this off. Storck’s cultural and philosophical examination of the trajectory of recent centuries is invaluable for all who would understand more deeply the complicated and contradictory Western world we live in.”

—PETER KWASNIEWSKI, Wyoming Catholic College, author of Resurgent in the Midst of Crisis

“I am stretched and challenged whenever I read anything by Thomas Storck. In this fine collection of essays, he examines the many streams of thought and convictions that have led our contemporary world away from its philosophical and religious roots into post-modernity. Particularly in the final chapter he brings this all together to describe the plight we, our children, and our grand-children now face. As Joseph Pearce states in his excellent foreword, ‘He must be heard and heeded.’”

—MARCUS GRODI, founder and president of the Coming Home Network International, author of What Must I do to be Saved?

“Drawing upon the tradition of Belloc, Chesterton, and Dawson, Thomas Storck offers a compelling re-interpretation of developments within the Catholic Church since the Second Vatican Council. Moving beyond the stale, false alternatives of liberal and conservative, Democrat and Republican, Storck argues for the necessity of a distinctly Catholic social vision predicated upon the organic unity of family, faith, economy, and culture. These essays are a true breath of fresh air offering new possibilities for an authentic public Catholicism open to the world yet committed to the first principles of the faith.”

—CHRISTOPHER SHANNON, Christendom College, co-author of The Past as Pilgrimage

THOMAS STORCK, a convert to the Catholic faith, is a social and cultural philosopher and historian who has written widely concerning the intersection of Catholic faith and culture. He is the author of three previous books, The Catholic Milieu, Foundations of a Catholic Political Order, and Christendom and the West, as well as numerous essays and articles; and is a member of the editorial boards of The Chesterton Review and Ethika Politika.