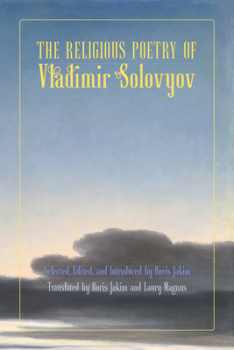 VLADIMIR SOLOVYOV (1853–1900) was one of the most remarkable figures of the 19th century. He was the most important Russian speculative thinker of that century, publishing major works on theoretical philosophy, the philosophy of religion, and ethics. He also wrote profound religious verse, much of which is translated into English here for the first time. Included are all of the short lyric poems; Three Meetings, an autobiographical poem of mystical visions; The White Lily, a comical-mystical play, a genre invented by Solovyov; and a ground-breaking essay (translated into English for the first time) on Solovyov’s poetry by the eminent theologian Sergius Bulgakov. The most important poems are sophianic, in that they express a personal relation to Sophia, whom Solovyov encountered several times during his life. This book presents an aspect of Solovyov’s work that most readers are unaware of; it enables us to watch a spiritual genius plumbing the depths of cosmic truth.

Praise for The Religious Poetry of Vladimir Solovyov:

“With this generous selection of Solovyov’s poetry, Boris Jakim and Laury Magnus make it possible for English speakers to explore an aspect of Solovyov’s creativity which is little known outside of Russia. Solovyov’s poems fuse biblical faith with European Romanticism in fresh and inspired ways. The poet deploys a remarkably broad range of tones and themes, inviting us to contemplate the cosmos as the living garment of God, charming us with love lyrics, entertaining us with his mischievous sense of humor, and summoning us to the work of social justice with all the vigor of a Hebrew prophet. The translations match the clarity of the Russian originals. Solovyov was a mystic, but he was neither obscure nor esoteric. As our skillful translators recognized, he can speak to all of us.” — PAUL VALLIERE, McGregor Professor in the Humanities, Butler University

“Vladimir Solovyov, Russia’s first real philosopher, was perhaps the most important writer of the generation following Dostoevsky. His work combines mystical vision, profound erudition, and mordant wit. But he was above all a poet, and it is still as a poet that he is best known in Russia. Some of his philosophical works have been made available in English translation, but now, for the first time, we have a major collection of his poetry, superbly translated into English verse by Boris Jakim and Laury Magnus.  This book will finally enable English readers to take the full measure of Solovyov’s genius.” — RICHARD PEVEAR, translator of The Brothers Karamazov and Anna Karenina, etc.