Images from The Way of Beauty: Pythagoras in the School of Athens

The wall painting, the School of Athens, was commissioned by Pope Julius II from Raphael in the first part of the 16th century at the height, if you’ll forgive the pun, of High Renaissance. It is considered by some as his greatest work and is part of a whole series of frescoes that decorate the wall of what were Julius’s private rooms in the papal palace at the Vatican. It shows all the greats of Classical Greek philosophy.

This painting also highlights the point that for the Christian the bible is not the only source of knowledge on matters spiritual. We can get an understanding, even of God, by reason based upon information mediated from the senses. We cannot know all things this way – some things are known only because God revealed them to us through scripture, such as the existence of the Trinity. The truths that cannot be deduced by natural philosophy are called the ‘mysteries’ of the faith. 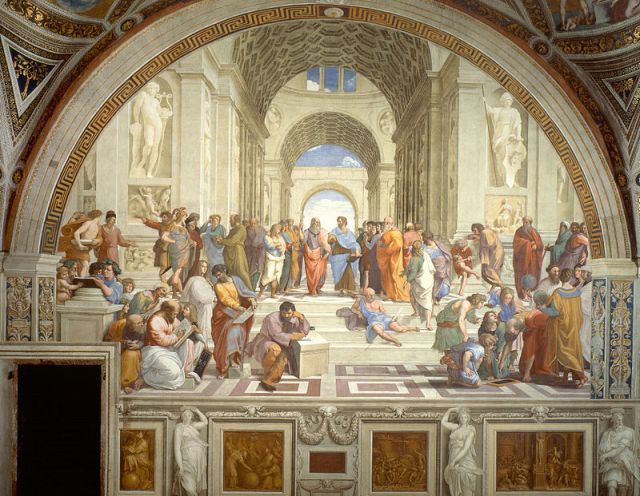 The two central figures in the painting are the giants of Greek philosophy: Plato, who is pointing upwards to his non- material world of ideals; and Aristotle, who points downwards and was so interested in the material world and information discerned by the senses.

In my book, the Way of Beauty, I focused on one figure in particular, who is front left: Pythagoras. Many know his name today because of his theorem that enables us to calculate the length of the third side of a right angled triangle given the length of the other two. However, he was better known in ancient Greece and by Christians up to the Enlightenment for his discernment of the spiritual significance of numerical relationships in the cosmos. Pythagoras suggested that once they are known they can become guiding principles by which the culture can manifest this cosmic beauty too, and by which a pattern of living and worship is ordered. This beautiful pattern of life is for the good of man and in harmony with the rhythms and patterns of the cosmos. Although Pythagoras’s fame is great, very little is known about him directly and what we do know is handed down to us by later figures who wrote about him, such as Plato. 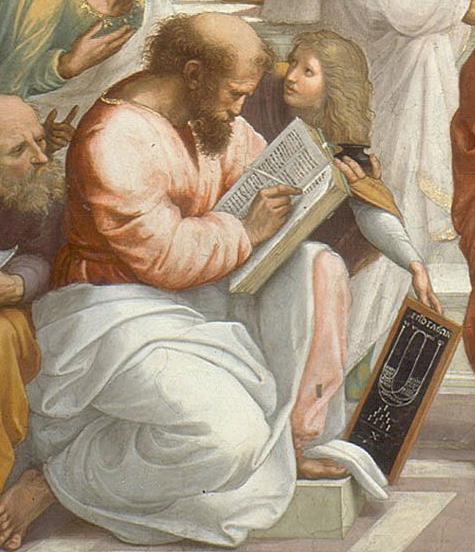 It may surprise many moderns that not only is the passage of the Catholic liturgy through the seasons of sacred time built on these patterns of cosmic beauty, but even today in this aggressively secular culture, the pattern of time that we live – days, weeks, months years – follows this cosmic rhythm. It is natural for man to do so. Attempts to depart from it, such as after the French revolution, caused such disruption to the society that they quickly returned to heavenly time…even if they didn’t believe in it.

Plato, who lived about 150 years after Pythagoras, is shown in Raphael’s portrayal carrying the Timeaus. This book refers to Pythagoras, and Plato incorporates his mystical number theory into his own account of the world. For centuries the Timeaus was the most known of Plato’s works in the West. Two leading figures who brought the ideas of Pythagoras into the Christian thought and reconciling them with scripture were St Augustine and St Boethius whose lives together spanned the fourth, fifth and sixth centuries AD. Boethius, who is the later of the two, is the source I rely on most heavily in my book when describing how these Pythagorean ideas govern the beauty of the cosmos and the culture. If you look at the fresco there is a figure behind Pythagoras looking over his shoulder at the chalk board (which is a diagrammatical representation of the numerical relationships that create musical harmony). The identity of this figure is disputed, but some think that it is Boethius. I would certainly like to think that this is the case.

The medium of this painting is fresco, in which finely ground pigment is suspended in water (like clay in stream water when the bottom is disturbed). This is then painted in onto the wet plaster in multiple washes. As the plaster dries it chemically binds with the pigment and fixes it in place. It is one of the most durable of mediums and if the surface is clean the painting will look as fresh as the day it was painted. It is always difficult to paint deep shadow in fresco, as with egg tempera which is used in icons, black tends to look like soot sitting on the surface. For this reason artists tend to work in the upper register of light and frescos often have this light, airy look to them.

Preserving Our Catholic Intellectual and Cultural Tradition in the Digital Age. Twitter @AngelicoPress
View all posts by Angelico Press →
This entry was posted in Featured and tagged David Clayton, sacred art, The Way of Beauty. Bookmark the permalink.
Loading Comments...
%d bloggers like this: